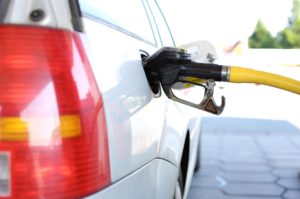 We’ve all done it.

The gas pump shuts off just shy of a perfect gallon. So we grab that pump, press the trigger, and squeeze in that extra bit of gas.

After all, what’s the big deal? A little bit more gas isn’t hurting anyone, right?

You couldn’t be farther from the truth. Topping off your tank when filling up with gas can cause all kinds of serious problems.

We’ve put together this guide to show you why you should never top off your tank when you’re at the gas station.

So let’s get started below!

What Does It Mean to ‘Top off’ Your Gas?

But if you’re a new driver or someone who just hasn’t heard of the phrase, here’s what it means.

When your gas tank is full, the pump at the gas station will turn off to prevent any more gas from entering your tank. After this happens, you can squeeze the trigger and get a few more cents worth of gas in your tank.

Or so it seems.

Topping off your tank doesn’t actually give you any more gas. Even though the screen shows the gas going into your tank and the price going up, the gas never makes it that far.

It just fills up the pump and stops before it can get to your tank (to prevent overfilling). In other words, you’re paying for gas you don’t actually get to use.

The Dangers of Topping off Your Gas Tank

Losing money isn’t the only danger of topping off your gas tank. Trying to squeeze in that extra gas can cause all kinds of problems.

Here’s why you should never top off your car.

Gas expands when you drive your car, so there should always be some extra space leftover inside the tank when you’re done filling up. If you add too much gas, it can overflow your tank and get inside the charcoal canister, which is meant for the gas vapor.

This can damage the charcoal canister and, in some cases, ruin your car’s engine as well. Because of this, your entire car can begin to run poorly.

And these aren’t cheap fixes. You might have to spend over $1,500 just to repair the canister, and fixing your engine can cost even more money.

Topping off your car isn’t worth the risk of damage.

We’ve already talked about a few ways topping off your tank can make you lose money. But expensive repairs and paying for gas you don’t get to use isn’t where this stops.

Most gas stations have something called a vapor recovery system. This prevents gas leaks and stops harmful vapor from escaping into the environment.

If you try to top off your tank, the pump might actually suck gas back out of your tank instead of just stopping the gas from entering your tank. You aren’t just paying for gas you don’t get. You’re also losing gas you already paid for.

Remember, overfilling your tank can damage your charcoal canister. This means the canister won’t be able to protect you as well from harmful vapor like it’s supposed to do.

Overfilling your gas tank can also cause extra gas to leak out of the tank while you’re still at the station. While this isn’t a serious problem most of the time, it can be dangerous.

After all, gas is flammable. If you get it on your hands then try to light a cigarette, you might end up hurting yourself.

Breathing in gas vapor is also harmful. You should do your best to avoid any contact with gas or gas vapor, which means you shouldn’t top off your tank.

Gas is also harmful to the environment in a number of ways.

For example, any gas that spills out of your tank after topping it off can seep into the ground. It can then go on to pollute water and harm natural plants and animals.

The vapor from gas is also dangerous for the ozone layer. It can actually damage the environment.

A little bit of extra gas isn’t worth hurting the world around you.

Vapor recovery systems help gas stations protect the environment, but they aren’t very good for the pump itself. Topping off your tank can damage the pump, and if this happens too much, the pump might stop working completely.

In other words, the person in line behind you won’t be able to get their gas, and the gas station will have to spend a bunch of time and money repairing it.

Topping off your tank can make life harder for a lot of other people.

Stop Topping off Your Tank When Filling up with Gas

Topping off your tank when filling up with gas doesn’t do you any good. In fact, it makes you lose money, and it risks harming yourself, others around you, and the environment.

A little bit of extra gas isn’t worth the risk.

So the next time you pull into the gas station, don’t top off your tank. You will thank yourself in the long run.

Want to learn more information about your car?

Make sure you take a look at some of our manuals!